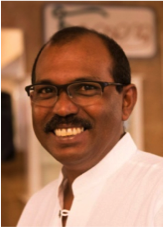 Sri Pranasiddhar, commonly known as Sri Pranaji, is a Siddha from the Ancient 18 Siddha Yogic tradition. He was born to Smt. Muniamah Chinapa and Sri. Parasuraman on 16 November 1965, Sitiawan Perak, Malaysia. His family is composed of deeply spiritual adepts who follow the Saivite Yogic tradition of Kashmir, and the Siddha tradition of South India.

. Sri Pranaji, started his yoga training at the young age of 7 under the tutelage of his father, Siva Yogi Sri Parasuraman, an adept in Hatha yoga and the Saivite tradition. In his early childhood, at the age of 10, Sri Pranaji began the basic yogic kundalini kriya practice, and entered into a phase of intense sadhana for 5 years. Later, Sri Pranaji diverted his attention to his studies, and during this period, became deeply interested in martial arts, which exposed him to additional energetic practices. He holds a first Dan Black Belt in the tradition of Kyokushinkaikan Karate, and is an Asaan (Master) of Silambam, the traditional Martial Art form of Tamil Nadu, which is closely related to Kerala’s Kalaripayat. Sri Pranaji’s quest to reveal the mysteries of internal martial arts practices led him to several Gurus. He met many great spiritual mentors from the Sufi and Siddha lineages, under whom he completed his spiritual journey at the young age of 25. After this, Sri Pranaji focused on his work until his calling came, and it came in the form of his first disciple in 2004. Sri Pranaji is the glowing representation of the Universal Truth; the truth that anyone, with dedicated practice, can achieve enlightenment, even while living as a householder. Apart from the Siddha Yogic tradition, Sri Pranaji is known to be an adept in the Sri Chakra tradition, as well as in Sufi, Tao and Buddhist traditions. Sri Pranaji is an embodiment of supreme bliss (“Anantham”), and has been working tirelessly to help humanity progress spiritually since a very young age. Sri Pranaji was entrusted with the teaching of the supreme knowledge of the “Arut Perum Jothi, Thani Perum Karunai” by Swami Ramalingam (The Vallalar), and ever since this Divine duty has been entrusted to him, he has been giving Cosmic Jothi initiations to spiritual seekers across the globe. Lineage The Pranashakty lineage is graced by Great Gurus and Masters such as The Vallalar, Shirdi Sai Baba,  Gautama Buddha, members of the Sufi lineage, and the Ancient 18 Siddhas of South India.

Teachings Sri Pranasiddhar is fondly known among his disciples as “Pranaji.” Sri Pranaji was instrumental in bringing the “Arut Perum Jothi” Cosmic Jothi Deeksha to this world. Sri Pranaji’s teachings and courses are widely sought after by many people worldwide due to their simplicity and openness, and due to the extremely quick results spiritual aspirants experience. He is considered “The Guru of Simplicity” who advocates spirituality for all. It has been observed that a vast majority of his followers are working class, married people. Sri Pranaji’s teachings help people to lead a perfectly balanced material, as well as spiritual, life. Many of his students, who reach great heights of spiritual growth, are evidence enough of his direct, effective, and practical approach to spirituality.

Sri Pranaji has developed a step by step method of achieving the Jothi Deham, or “The Deathless Body of Light,” through the Jothi Body of Light Levels 1 and 2, Advanced Kundalini and Savikalpa Samadhi retreats. Sri Pranaji also trains his disciples in the advanced Kayakalpa practices of Saava Kalai (“The Art of Deathlessness”), Kundalini Practices, Siddha Inner Power, Siddha Inner Beauty for Women, and Varma Kalai.